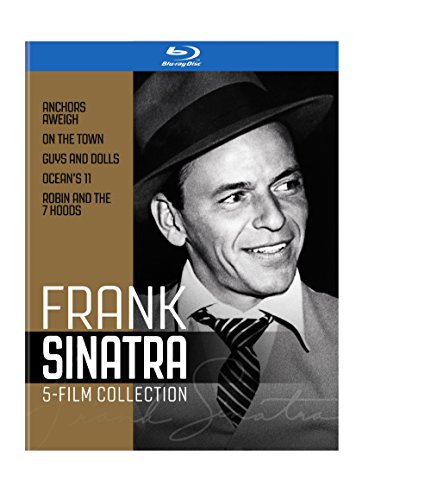 Frank Sinatra Collection (BD) THE VOICE. THE EYES. THE ONE AND ONLY FRANK SINATRA. ANCHORS AWEIGH: Frank Sinatra stars along with Kathryn Grayson and Gene Kelly in this wartime tale of two sailors on leave in Hollywood. Gene Kelly’s history-making choreography and beloved musical numbers make this a milestone of movie fantasy. Sinatra’s “I Fall in Love Too Easily”, the exuberant Kelly/Sinatra “We Hate to Leave” and other musical highlights helped Anchors Aweigh weigh in with a 1945 Academy Award® for Best Scoring of a Musical Picture, plus four more Oscar® nominations, including Best Picture and Actor (Kelly). ON THE TOWN: New York, New York, it’s a wonderful town – especially when sailors Gene Kelly, Frank Sinatra and Jules Munshin have a 24-hour shore leave to see the sights…and when those sights include Ann Miller, Betty Garrett and Vera-Ellen. Based on the Broadway hit and set to an Academy Award®-winning* score, On the Town changed the landscape of movie musicals by blending brilliant location and studio production numbers to up-and-at-’em perfection. The Bronx is up and the Battery’s down, but no one can be down after going On the Town. GUYS AND DOLLS: Hollywood legends Marlon Brando, Jean Simmons, Frank Sinatra and Vivian Blaine (from the original Broadway cast) are dazzling in this Frank Loesser (How to Succeed in Business Without Really Trying) masterpiece. Featuring hits like “Luck Be a Lady” and “A Woman in Love”, this smash film version of one of Broadway’s most popular musicals is guaranteed rip-roaring “four-star entertainment” (New York Daily News). OCEAN’S 11: New Year’s Eve in Las Vegas. When the lights go out on the Vegas strip, it’s the perfect time to steal a kiss or a $25 chip. But for Danny Ocean (Frank Sinatra) and 10 partners in crime, it’s the ideal moment to steal millions. Also starring Dean Martin, Sammy Davis Jr., Peter Lawford and Joey Bishop, and packed with location-lensed glamour, suspense, comedy and a stunning twist ending, Ocean’s 11 is a sure bet. ROBIN AND THE 7 HOODS: Robin and the 7 Hoods gives the Robin Hood legend a Depression-era, mobtown Chicago spin. North Side boss Robbo (Frank Sinatra) sets himself up as a latter-day Robin Hood with philanthropic fronts enabling him to scam the rich, take his cut and then give to the poor. Dean Martin, Sammy Davis Jr., Bing Crosby, Peter Falk and Barbara Rush join in the giddy, gangsterish fun. And the jazzy Sammy Cahn/James Van Heusen score (including Sinatra’s classic “My Kind of Town”) is the perfect match for this all-star cast. ]]>
Show More
Reviews